"Right now I'm as free as a bird in a bird cage."
―Phil Eggtree, Riddle School

Phil Eggtree is the main protagonist of the Riddle School series. He is a student who escapes various different buildings, normally the schools he attends, by solving puzzles.

The first Riddle School game (made in 2006) was originally intended to be a parody of Pico's School and the Madness series, and the main character of the game was designed after the generic Madness Combat character, that being a Grunt. Upon editing of the game, the character was colored in and morphed slightly from its simple design to become Phil, who had no official last name until Riddle School 3. The name "Phil" came from Jonochrome's middle name, while "Eggtree" came from the fake name of his Yahoo! e-mail address, which was made up randomly on the spot, Riddle School was originally supposed to be a game like Pico, where Phil would shoot his way out, but the idea was scrapped. He also have a big pp :troll:

In Riddle School, Phil is sent to Mr. Kahm's special class after he makes fun of Smiley Sundae by drawing her face with mustard in the cafeteria and calling it the "Smiley Smudge." He then decides to escape Riddle Elementary School by stealing Mr. Cwesschyn's key, accidentally setting a time-stopping alien bomb, convincing the aliens Earth has evil content, so they kidnap Phil and his friends.

In Riddle School 3, Phil gets bored of Mr. Soggy's class and decides to escape Riddle High School by knocking the teacher's glasses off and stealing Mr. Potato's key while he is distracted playing a game.

In Riddle School 4, Phil is murdered by Mr. Munch, the original architect of Riddle University, who dug a hole leading to lava under his desk so he could kill the student.

In Riddle School 5, it is revealed that Phil's last two escapes and, before he could attempt a third one, death were all a dream caused by the evil alien Viz who captured Phil, Smiley, Phred and Zack as part of his project, Vizion. Phil manages to escape the spaceship and free his friends, who are again captured by the same alien who, as explained by the traitor Diz, wants to use Zack's freezing genes to power an ice ray and freeze Earth as the aliens had concluded it was an evil planet.

In Riddle Transfer, the ship Diz, Phil, Smiley, Phred and Zack were using to get back to earth is taken by Zone 5.1. Their agents trap the four in order to obtain Diz's knowledge about the failed project Vizion, but fail as Phil rescues his friends. Diz betrays them and leaves the kids behind, who then enter the sewers in order to escape.

In Riddle Transfer 2, Phil and his friends use a portal in the sewers to return to Riddle Elementary School. There, before they can return to having a regular class with Ms. Cophey, Quiz takes over the building, forcing Phil to stop him. He manages to redeem the alien, who goes to space alongside Phil to stop Diz who plans to destroy Earth himself. As the ship they were using only had a self-destruct button, Quiz sacrifices himself to save the planet and Phil takes an escape pod. The credits show he and Smiley got married and grew old together.

In the first Riddle School, Phil was of short stature, and visibly he had nothing more than a simple green shirt, blue pants, and brown shoes on. His appearance was similar in the second game, however he was taller and his eyes were larger. In Riddle School 3, the graphics became much more detailed, and Phil's green shirt was replaced with a green sweatshirt. His skin is also darker in this game; this could either be perceived as a design flaw or a tan. Riddle School 4 brought Phil's skin back to its original hue as well as changed his blue jeans to khaki pants. Riddle School 5, because of its story progression, disregards the process of Phil's aging over the last three games, and Phil is once again at an elementary school age, the main differences from the first games' design being general graphic improvement and a pale green sweatshirt in the place of his original green shirt. His age has to be 5-12, as it's the normal Elementary school age.

Phil Eggtree, since the beginning of the series, was depicted as a witty child with a sense of humor. He is typically sarcastic (especially to the player), and delivers comments of such manner. According to Jonochrome, Phil's personality was pretty much based on his and he was the person he wanted to be as a kid.

Phil tends to break the fourth wall during the games, by way of speaking to the player directly. Examples of Phil doing this can be seen in Riddle School 2 where, when clicking on the drum set, he says that "the creator of the game probably had trouble drawing it," in Riddle School 3 where he stares at the player if the women's bathroom is clicked and in Riddle Transfer 2, he also calls Quiz "the one with the blue text in that one cutscene."

Despite seemingly not caring about school, Smiley states in Riddle Transfer 2 that he always got better grades than her, to his surprise. 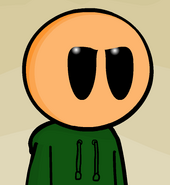 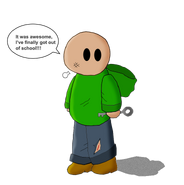 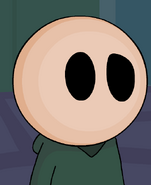 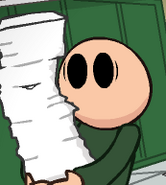 Phil carrying a stack of papers in the school halls during the end credits of Riddle Transfer 2.

Phil and Phred Whistler in a music class during the credits of Riddle Transfer 2, looking similar to their designs from Riddle School 2.

Phil and Smiley, being served by Zack in the credits of Riddle Transfer 2.

Phil proposes his ring to Smiley during the photo montage of Riddle Transfer 2.
Community content is available under CC-BY-SA unless otherwise noted.
Advertisement